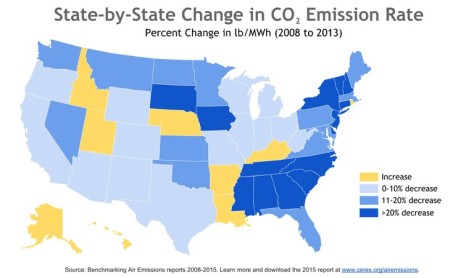 CO2 emissions from U.S. electricity generation fell 12% from the beginning of 2008 to the end of 2013 according to a recently released report. During the same period, the U.S. economy grew by more than 15% indicating that increased prosperity does not need to correlate with increased pollution. Renewable sources, including hydropower, accounted for 14% of 2013 U.S. electricity generation.

The report also call into question claims by sustainability opponents that the pollution control mandates called for in the EPA’s soon-to-be-released Clean Power Plan, will harm the economy. The worst pollution record from electricity generation is concentrated in only a few states and in 5% or less of the 100 largest U.S. power companies. Five companies account for 25% of CO2 emissions. While only three companies produce 25% of SO2 emissions. During the report period, only eight states saw an increase in CO2 emissions from electricity production while those emissions decreased an average of 19% in 42 states.

The report is a collaboration between, Ceres, a business sustainability consortium, the Bank of America, four power producers (Calpine, Entergy, Exelon, and Public Services Enterprise Group), and the Natural Resources Defense Council.